OPAC Functionality in the Primo Interface: A Single Entry Point for Search and Delivery

In a recent demo, a discovery system provider showed a link from a record in their discovery system to the same record on the institution’s OPAC. The OPAC record opened in a new tab next to the tab showing the discovery system. After the representative finished showing the catalog record as it appeared in the OPAC, she said, “and now I’m going to close this window because having so many tabs open gets confusing.” This representative unwittingly pointed out one of the reasons why it is so important to have OPAC functionality directly integrated within a discovery service. Sure; you can link from one system to the other. However, the entire purpose of a unified discovery service is to have everything in one place. Performing all library functions in one interface is simply more efficient.

This is exactly what we do in Primo. OPAC functionality is built right into the system without the end user needing to jump from the discovery service to the ILS. End users can find, view online, or request resources using one, unified system. End users also manage their personal details and system settings in one, unified account, directly from their Primo interface. Karsten Kryger Hansen, a development consultant from Aalborg University, which uses Primo integrated with Aleph said, “OPAC functionality in Primo gives an integrated experience of working with a single system also when it comes to the user’s personal account.” Having one library account and managing it in one interface is simply much easier for end users.

Customers are pleased with the OPAC functionality offered by Primo. Jack Ammerman, associate university librarian for digital initiatives and open access from Boston University, said that his options have vastly improved thanks to the Primo-Alma integration. He can set different privileges for various user groups, and users can request that items be digitized, options that were not available in Boston University’s previous OPAC. And, after extensive testing, Ammerman found that Primo has superior known item searching—a frequent activity for users coming to the OPAC to access or borrow a specific item—over BU’s previous OPAC.

My Account – Items currently checked out at Boston University

Additionally, thanks to the flexibility and openness of the Primo system, both Aalborg University and Boston University have been able to customize their user interfaces to suit their precise needs. Aalborg University added tooltips to inform users of the particular library in which the item is located, and a “where is the book?” service, which provides a map of each item’s location. 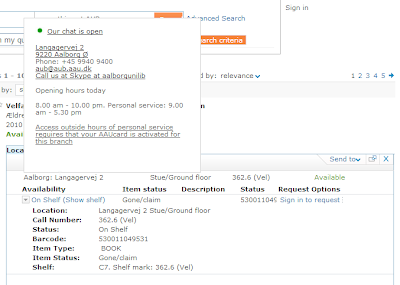 This fall, Boston University will add a WorldCat tab to the search box so that users can access items from all Boston Library Consortium members.

Similarly, the British Library  created an ”I want this” tab on their result list. Using SFX, the tab shows the location of the desired item—e.g., their reading room, their document supply order form, or their sound room—and enables users to link to the item in the selected location.

”I want this” tab at the British Library

It is natural that Primo provides OPAC functionality for the Ex Libris systems, Alma, Aleph, and Voyager. However, many other systems are also supported. OPAC via Primo functionality for Talis was recently released, and other systems such as SirsiDynix Symphony and Horizon are supported through mashup (that is, their OPAC is integrated in a frame within the Primo page). Furthermore, virtually any library can create OPAC via Primo (OvP) functionality for its users. BIBSYS—the software provider of over a hundred higher education institutions in Norway—is currently implementing OPAC via Primo for their own proprietary ILS. Jørgen Madsen, Asia-Pacific pre-sales director, said, “I think it goes to show how open a solution Primo really is.”

The library world is heading toward system consolidation. The better we integrate systems, the less librarians have to actively ensure that the systems are coordinated, and the simpler and more intuitive it becomes for end users to find the materials they need. Ex Libris has invested in innovation in library discovery and automation for a long time, and the results show. To date, Ex Libris is the only player that has been able to actually provide an end to end solution that integrates discovery with ILS. The Primo integrated OPAC experience is already a reality today.

Hear from our Customers